A must have for the women of India :-) Mehendi or henna, a photo by srinathiyer on Flickr.

Thanks to my wife, now it’s become a routine for us to visit a temple and then a great breakfast or a brunch someplace in Delhi. Trying to inculcate the godliness into my son and me :-)

So we started frequenting the Sree Swaminatha Swami Temple  in New Delhi. A temple where I used to be taken to when I was a kid. The temple is fondly called "Malai" Mandir by the Delhities or "Malay" meaning hill and not cream..as its situated atop a small hill.

A beautiful place..quiet and houses the sanctum sanctorum of Lord Swaminatha or Karthikeya or Muruhgan, S/o The Original Dude Siva

This is where we found one of the Peacocks roaming around as it was being called for lunch by one of the priests. Yes! They get a lot of respect..more than the people who come here to worship the idols. The peacock or Parvani as its called is the vehicle of Karthikeya..

Comics!!!! that was my steady diet when growing up..and still is..the asterix tintins indrjal comics..phantom mandrake atomic man antman superman batman..oohh there were so many of them. As kids we all used to read and read and read and then get together ..tie a towel like a cape and jump on the bed..summer vacations were the time when we used to open up small libraries and rent out our comics to all the uncles and aunties in the localities..and they used to indulge us by borrowing the comics...thanks to all of them..aah the good old days :-)..yep!..me dad used to scold us and he had to change the spring mattress at least thrice..now you would ask "what? Only thrice?? " well..dad used to buy good quality spring mattresses..my  son now does the same :-)
Had heard about comic cons and seen them on TV..and it was a great thing for me when this was organized ere in Delhi.
Had attended it last year too..but was heavily raining that day and that was quite a dampener.
So this year took my son and wifey along to experience nostalgia. My 7 year old son was very happy running around..meeting all the comic characters and flipping through pages and pages..
So we walked in Dilli Haat next to INA New Delhi..on the way to the comic con entrance as usual there were all artisans displaying their wares..some stuff caught my eye..and lo and behold..I forgot my camera and my camera lenses. Well age is catching up !! but then I said to myself.."to hell with age! Am still a child at heart..and I have a Samsung Galaxy Note with an 8 mp camera..let me try that today!!"
So all these photographs are taken from my mobile phone. Well I was quite a comical sight holding a big phone clicking away :-)
Digressing..This is NOT a review on the NOTE..back to the walk now
This artisan looked quite peaceful in a sea of Budhas and Ganeshas. Brilliant brass figurines cost a brilliant amount..but can be bargained :-) Dilli and NO bargaing?!..hmmm that would be the day!
From a distance these guys looked real enough..but these are the guys who really define the term "Rock you like a hurricane"..The Scorpions..for those who came in late..literally :-) .
Well..The Taj Mahals here were worth saying Wah! Taj. Made in different sizes to suit ones pocket..but me thinks..the size is more to show how much one loves the other..;-)
This was the high point. Finally Dilli Haat has a pay and use Restrooms..which are a lot more cleaner than its neighbor next door. No crap this..very very true !
And then..we saw the entrance..with the Comic Con mascot greeting us..Superkudi is what she is called..naiicee :-)..after shaktiman and krishh superkudi now a competition to superman and the rest.Superkudi is a superhero with a Punjabi touch created by Adhiraj Singh.
The sponsors had a lot of crowd Disney and Marvel, who were busy promoting the movies..John Carter of Mars and The Avengers. Good fun this was..but let me ask you..would you like to read the comics or watch the movie?..i like to do both :-)
Years back, I met Ananth Pai..God Bless his soul..I think I was 7 or 8 years old that time. Still remember walking all the way to a venue to partcipate in a Quiz. Was thrilled to see him, shake hands with him and also talk to him. Amar Chitra Katha was what gave us the teachings from the Panchatantra, Jatak Tales, Mahabharat Ramayan etc. Here in comic con met Vivek Goel ..got the Ravanayan - a stark but beautifully depicted story on Ravan..his view point actually. Loved reading these comics..Vivek..nice work:-)
Oh yes..thats Shikari Shambhu first seen on Tinkle..a lazy not so courageous funny hunter :-)
.
Well.. that's when we felt hungry and went to The Punjabi Rasoi. They were too completely into the Comic Con..with Snakes, Amlets, Slids, and the galick Naans in their menu..ran away from there..certainly did not want a comical stomach....(hmm! I know what you are thinking..I could have used the 10 rupee loos ..FYI..we didn't have any 10 rupee notes with us..only the 35K NOTE..Eaargh! that was a bad PJ)
Went in for the tried and tested momos from the one of  North Eastern food stalls and biriyani from the Andhra Pradesh Stall and Mishti Dohi from the Bengali stall :-)
That is Tars Tarkas..the warrior who tries to kill John before both become friends. Who is Edgar?..Come on! Dont you knw Tarzan of the Apes??
Lots of kids freaking out..getting their sketches and getting the avengers painted on their hands. It was really exhilarating to see the kids away from the TV sets and Xboxes and indulging in the reading habit.
Guess everyone was a kid here :-).. Strictly NO ADULTS
Now this was the RAT who was having fun with the p... sorry..this is supposed to be a nice blog :-)...girls.
So much fun that he started following the girls and did not look at all the kids waiting to meet him .... 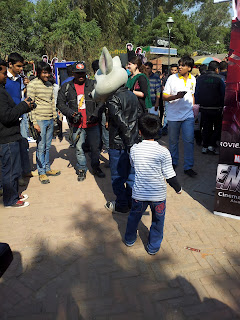 ....and sure enough he got his tail pulled
Supandi..grab his comics to know him and let the stress go away from your life and mind !
Well all the comics, the running around, the excitement did leave us feeling happy..so we went in for some kulfi
For some it was too tiring..so super powernap tho banta hai :-)
Last but not the least...whats a collection of superheroes have in common..yes..a super villain..Found this unattended bag outside while having a nice cuppa tea..so called the cops to check it out..yep..these are the real superheroes of Delhi not a figment of imagination..who came in to check out the bag..nothing happened..it was a bag full of clothes..they took it away with them.

so that was the comical journey we had..my version..you want news and reports and reviews .. Google for comic con 2012 New Delhi :-)

PS: am searching for old indrajal comics..if anyone knows where to get the entire series please do let me know :-)